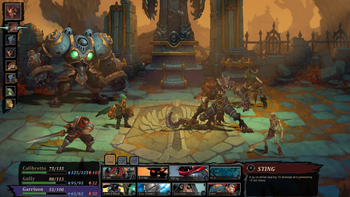 The Combat is one of the Game Mechanics in Battle Chasers: Nightwar.

The turn-based Combat in Battle Chasers is inspired by the great JRPGs of years past, with three major features: the Mana system; an Active Initiative Bar with random Buffs and Debuffs; and momentum-shifting super Actions called Abilities. 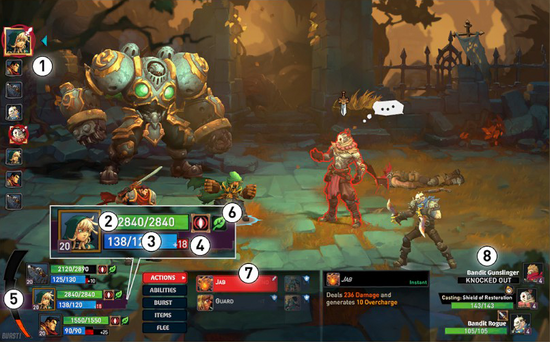 All of your encounters with enemies will play out in the Combat Screen. Combat is turn-based and ends when all the enemies have been defeated. Your Heroes' health and mana pools will persist from battle to battle so be sure to conserve your resources for the more challenging encounters.

This displays the order that the heroes and enemies will perform their turns. Abilities have different speeds that determine where they appear on the list.

This is your heroes' lifeline. When the health meter is drained, that hero will be knocked out and unavailable to fight any further. Use potions and healing spells to keep your hero fighting.

Mana can be used to perform Special Abilities. Use potions to regain mana if you are low, or perform basic actions to gain Overcharge.

By performing basic Actions in combat, heroes will gain Overcharge which acts as bonus Mana that can be used to perform Abilities that consume "Mana". Overcharge can only be used in the current battle and does not carry over once the battle ends.

The burst meter is a communal poll that all heroes contribute to any time they perform actions or take hits during combat. When filled, heroes can perform their Burst Abilities which will consume 1 to 3 segments of the Burst Meter.

Status Effects (Buffs and Debuffs) that are applied to a character will appear as icons next to their meters.

Choose from a list of Actions, Abilities, Bursts and Consumable Items that a hero can perform when their turn comes up in the Initiative Bar.

Each Enemy will display their current health and buffs. As you defeat enemies you will unlock the ability to see their names and powers in the Bestiary. You can open it during battle to view additional details.